The CX Leaders Intelligent Guide To Growth 🚀 GET THE GUIDE

A recent headline tells just how big Amazon has gotten:

If you are not based in the US, you can easily substitute the brands above with the top 4 retailers in your country and it will probably still work. With the caveat that Market Cap is as much about looking forward as it is about current results, it is hard not to notice the company is taking the world by storm. Its enigmatic founder, Jeff Bezos, is now the richest person in the world. And yet, Amazon could have easily disappeared years ago as did most of its brethren from the dotcom boom of the early 2000s. So what kept Amazon in the game against the odds?

Let’s first cover what wasn’t as important as most people think. The idea to sell stuff over internet, while obviously a good one in retrospect, was never unique to Amazon. And even if you wanted to build a Walmart on the internet why on Earth would you start with books? And how to account for Amazon’s continued success from a book store to general e-commerce, to cloud computing, to hardware devices, to media production and beyond?

Here’s the real secret to success in the words of Bezos himself:

We’ve had three big ideas at Amazon that we’ve stuck with for 18 years, and they’re the reason we’re successful: Put the customer first. Invent. And be patient.

Let’s unpack this a bit further.

Early on Amazon billed itself as Earth’s Most Customer-Centric Company. Whether this is, or was, ever true is a matter of debate but it was certainly a goal that went through pretty much everything Amazon did. Bezos again: “If you’re truly obsessed about your customers, it will cover a lot of your other mistakes.”

Amazon has invested heavily in customer service and customer experience, realising the difference between the two.

On the service front, they make support as effortless as possible at their scale and you often see conversations with Amazon customer care agents published online for their humour value, something inconceivable with most retailers.

On the experience side, Amazon is famous for launching academic studies on the speed of their front page. It’s no surprise Amazon has invented the One Click Checkout process. They continue to innovate in the delivery area, constantly introducing new options that make customers’ life easier. Again, traditional retailers don’t put nearly as much effort into the experience of shopping as opposed to the actual products on the shelf and their prices. Or they didn’t use to until Amazon has forced the industry to pay attention. I can’t stress enough how important listening to your customers is in an experience economy. But customers will also never tell you everything you need to know to be successful. Customers won’t create the Kindle, Alexa or EC2 for you. With the most innovative products, customers don’t realise they desperately need it right until they see the product in the flesh, and sometimes not even that.

For Amazon this meant that building a culture open to innovation was an incredibly important part of the puzzle. They took on a huge industry and won but still haven’t decided to rest on their laurels like most companies would. They still release lots of unexpected new products, quite often outside of the comfort zone.

The secret sauce is that Amazon is still listening to their customers even when they are inventing. You don’t do exactly what the customers say but you use their reasons and rationales as the background for your ideas. I would guess no single customer told Amazon everything they needed to build the Kindle. But they likely knew that a large enough portion of their customer base prioritised speed and convenience over the qualities of a paper book. 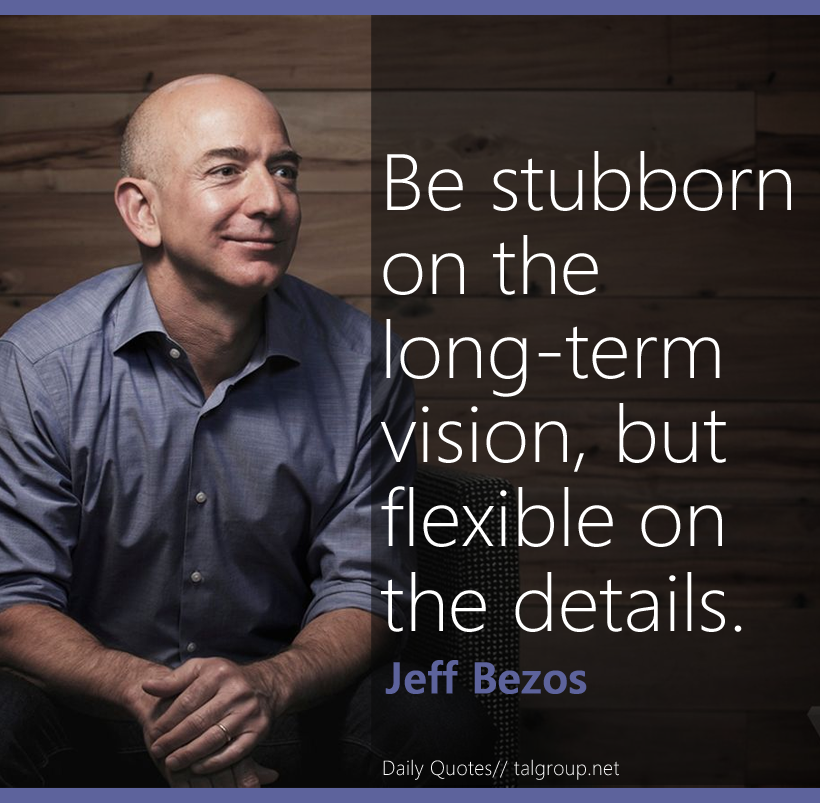 Much of the above seems like conventional wisdom. It isn’t really. Most companies you will read about claim to follow the same principles but even now you rarely see them in practice, especially at scale. The reason is usually lack of a long term vision. If you are only thinking about the next quarter; investing in customer experience and inventing seem like a waste of money.

Amazon, on the other hand, looks longer term:

Most initiatives we undertake take 5 to 7 years before they pay any dividends for the company. -Jeff Bezos

This was Amazon from day one. And that is why they have invested in so many seemingly outlandish ideas, far outside of the comfort zone. There were many fails along the way (Kindle Fire anyone?) but the company has always had more than enough success to compensate for those.

The second part of being patient is the perseverance. The first version of most Amazon products usually looks like a bit of harmless fun. Over time, with plenty of twists and turns some of them end up changing whole industries.

Bezos doesn’t say this but a separate and equally important reason Amazon was able to achieve so much so quickly is because their competitors aren’t doing any of the seemingly obvious things they are. You frequently hear these companies say “my industry is different, all this customer experience stuff applies in retail, but not in X”. Airlines, telecom, utilities, banking, insurance and even video game companies somehow still believe they are special and rules are different for them. Sometimes it’s Amazon itself that proves the opposite, sometimes it’s one of the new breed of companies that share their core values.

The reason Amazon was so successful across a very diverse set of industries is because the principles outlined here apply across the board. If you feel like reaching for an excuse, I am sure I can name a company in your industry that is already competing on customer experience and will soon dominate the field if you do not start thinking in this way.

Or you can take up the challenge yourself and win your industry by focusing on customer experience ;I’d suggest the latter approach.