Welcome to the Ultimate Guide to Net Promoter Score

In 2003, Frederick F. Reichheld introduced the concept of NPS in the seminal article ‘The One Number You Need to Grow‘. Following two years of research, measuring the link between survey responses of individual customers of a company and those individuals’ actual referral and purchase behaviour. Reichheld and his team found one question was correlated directly with differences in growth rates amongst competitors in multiple industries, “how likely is it that you would recommend [company X] to a friend or colleague?”.

It was a tipping point in the industry. A path to profitable growth lied in a company's ability to get its loyal customers, in effect, to become their marketing department. Companies that enjoyed the highest rate of growth had the highest net promoter percentages among its competitors.

Reichheld found that a simple question was able to show a correlation between NPS and long-term growth. It has now become a key performance indicator (KPI) for many industry leaders to understand customer loyalty.

Indeed, other factors besides customer loyalty contribute to a companies growth, economic or industry expansion, innovation and so on. While it would be a bold claim to say it guarantees growth, in general, it can't be achieved without it.

It's now widely accepted that a simple real-time feedback loop is essential for businesses to measure loyalty and to use the Net Promoter Score (NPS) to measure customer loyalty has become industry best practise.

What is Net Promoter Score?

Net Promoter Score (NPS) is a seemingly simple yet effective way for companies to track and measure promoters and detractors to produce a precise measure of their performance through its customer's eyes.

NPS is built on the basis that every company can divide their customers into three distinct buckets - promoters, passives and detractors and customers are categorised based on their response to an NPS survey question - “How likely is it that you would recommend us to a friend?” on a scale of 0-10.

Once you’ve identified your Promoters, Passives and Detractors with your NPS survey, close the loop with personalised follow-up communications to each group.

The follow-up communication is critical. NPS is not about a number but about learning and improving. Understanding the drivers behind the score provides vital insights into why people are loving or hating your product. The second follow up question is what gives NPS its one-two punch, and allows you close the feedback loop.

The goal is to discover patterns inside the data. For promoters, do more of what works. For detractors, do less of what’s causing customers to leave your product. For passive, ‘ignore’ them for now. If you work on decreasing detractors and increasing promoters, you’ll address the passives over time. The primary goal is to identify pain points in your system that are creating repeatable results.

The cool thing about growing your NPS is that if you continue to improve it, you will have more and more people going around saying your product is excellent. However, be warned, growing your NPS is hard and you won’t see results overnight. It requires a long-term effort to build out internal processes to understand how your customers feel about their experience at scale, providing you with actionable insights to create experiences that will have your customer coming back to you time and time again.

How Do You Calculate Your NPS

Your NPS is calculated by subtracting your percentage of detractors from your percentage of promoters. The best possible NPS is +100, and the worst is -100. Your passives are excluded from the calculation since their loyalty is relatively neutral.

Responses can be defined into three distinct clusters that represent different attitudes, sentiment and economic value.

Promoters (scored 9-10): Promoters are your biggest fans. They actively advocate your product on your behalf, bringing in the majority of referrals, and are far more likely than any group to remain customers. Their Customer Lifetime Value (CLV) is far greater than any others.

Passives (scored 7-8): Passives are satisfied for the time being but can defect at any time. Their referral rate is as much as 50% lower than promoters, and those referrals are of far less quality. Their CLV is also usually less than half that of promoters.

Detractors (scored 0-6): Detractors are unhappy customers and account for more than 80% of negative word-of-mouth opinion. They have the highest rates of churn and defection and harm your company’s reputation, putting off new customers. 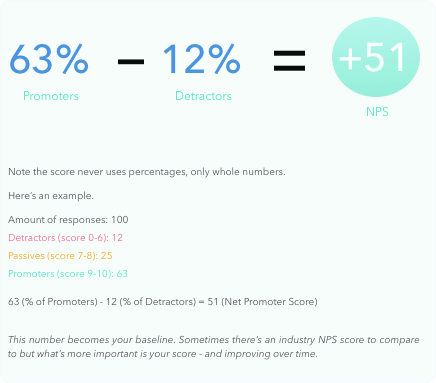 The Net Promoter Score is a simple and straightforward metric that can be shared throughout the company with every function and team. You can also track by product, store, team, geography and more to focus on the goal of improving customer experience.

Now you have the basics in check. Read some of the chapters to take your knowledge of the Net Promoter Score to the next level!

Here’s what we'll be covering our NPS Guide (click the title to read an article):